This year at SuiteWorld Plative was proud to have one of the amazing members of our team participate in the NetSuite Hackathon 4Good challenge. Ana Montano, The NetSuite principal developer at Plative did an amazing job at the challenge and we are so proud to have such an amazing person on the Plative team.

Pictured is Ana at SuiteWorld

Six teams consisting of NetSuite partners and customers spent a day at SuiteWorld solving problems for a non profit organization, Operation Underground Railroad (O.U.R.)  Hackathon 4good is a NetSuite tradition bringing in the NetSuite community on the first day of SuiteWorld to show off their technological prowess while assisting an amazing nonprofit organization. Drawing inspiration from the historic Underground Railroad, O.U.R. exists to rescue children from sex trafficking and sexual exploitation. The Utah-based organization has assisted in rescuing and supporting thousands of survivors in every US state and 30 other countries.

O.U.R went live with NetSuite earlier this year. They have established real-time reporting and has formalized its workflows using NetSuite. NetSuite is also used as a case management system for the Aftercare programs that support the survivors that O.U.R rescues. By using NetSuite automation administrative costs are kept low meaning every dollar that is donated to O.U.R can go further and be used to fund awareness, rescue, operation, and aftercare.

The major problem that O.U.R wanted to solve was in relation to their donation program. Currently, O.U.R allows for donors to pick which area of the organization they want their donation to fund ranging from operations, aftercare, domestic law enforcement relations, or adoption. O.U.R wanted to easily create packets of marketing material that would be specific to the donors interest in order to put forward the most impactful and important information to donors and improve O.U.R’s ability to serve its cause.

The challenge was structured with teams who would then present their solution to a combination of judges and O.U.R leadership. Team OurTrack won with a solution using the grant opportunity form in NetSuite to build in some additional functionality. This now allows for regional directors at O.U.R to choose from a list of marketing materials based on donors interests using the grant opportunity form. Then, through NetSuite, the materials will be compiled and sent to the donor automatically without members of O.U.R having to manually send emails through outlook or compile the materials by hand.

“This is amazing,” said Sarah Dalling, a project manager at O.U.R. “I wish I had this group with me all the time, because their think-power has been phenomenal. We’re looking to be good stewards of donation dollars – and when processes are automated, more of those dollars can go toward actual operations.”

Here is also Ana’s description of the event as well as her solution which almost won the competition!

Prior to the challenge Netsuite had sent an email with a summary about what to expect at the event and a brief description of what the challenge was. At Plative we internally reviewed and troubleshot what will be a good solution for this.

The day started at 8:30, people started arriving at the conference room at the Flamingo hotel. At 9am they did a presentation about Operation Underground Rescue (O.U.R.) and then they talked about the requirements while introducing us to the O.U.R team and also NS team. After, they gave us a paper to show what our qualifications were so we could form into teams.

Our team solution was focused on gathering information from potential leads in a questionnaire and sales reps will type answers directly in the NS lead record. A suitlet will then gather the suggested PDF that the lead should receive and allow the user to select or unselect files. Then it combines and sends it to the lead. 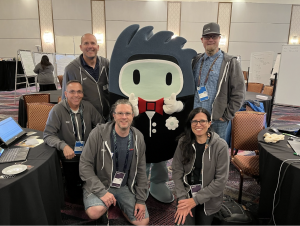 At 7pm all teams started presenting the solution, we were given 5 minutes. Most did a live demo of the solution. All solutions were amazing and focused on different NetSuite functionality, it must have been hard for O.U.R to select a winner.

At 8pm we headed to the terrace for drinks and mingled and at 9pm they announced the winner.

If you found this story interesting or want to learn more about Plative and NetSuite, please get in touch!